When Marjorie King, PhD, ATC, PT, was helping plan the Women in Athletic Training Reception, an event during NATA 2015 designed to celebrate the legacy of the Women’s in Athletic Training Committee, she said she hoped at least 25 people would show up. Must to her delight, approximately 250 NATA members filled the Regency Grand, Landmark 4, Wednesday, June 24, to celebrate the history of women in leadership roles in the athletic training profession.

The reception kicked off with a presentation on the history of the Women’s in Athletic Training Committee, which began in 1995 as a task force.

“I think, over time, I really came to realize how few women were in leadership roles, and we needed to have a way to really get women involved and to remind people that we have a part in this profession and are important when making decisions,” said Katie Grove, PhD, ATC, LAT, who submitted the task force proposal to the NATA Board of Directors.

After surveying both female and male members of the association, similarities were found.

“We discovered that a lot of the issues women had were the same issues that men had,” said Gretchen Schlabach, PhD, ATC, LAT. “We began to make the members aware of issues like life balance, and the more they became aware of life balance, the more it was OK to talk about and the more athletic trainers worked to take care of one another.”

After the history presentation, attendees had the opportunity to mingle and look at timelines created showcasing the achievements of women in the athletic training profession and within the association.

King said the reception helped to highlight how the NATA has grown over the years and how the involvement of women in the industry has taken off. Currently, 53 percent of the NATA membership is comprised of women.

“Things have changed a lot last 30 years, certainly in the last 20,” King said. “The reception was really just a reflection of the last 20 years and how [the profession] has evolved. It was amazing. … It was a wonderful interaction of the membership – male, female, old and young.” 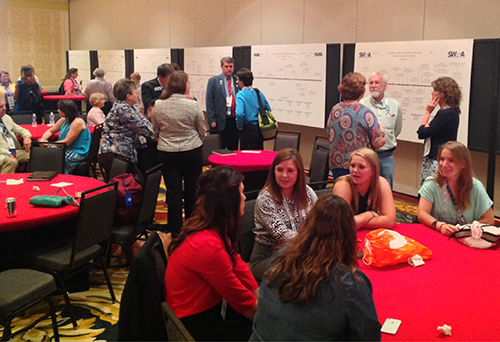 A big focal point of the reception was the historical timelines depicting the history of women leaders in each district, which you can view here:

The reception also included a “Where Are They Now” PowerPoint presentation.

King said the reception has kicked off a project to collect the history of women in the association. While the details of the project are still being finalized, the end goal is to provide members with a thorough historic record in a format that can be accessed by all.

August/September NATA News: From the Editor