AT, SPL team up to increase awareness of vocal cord disorder

When an athlete has trouble breathing, pinpointing the exact cause can be a challenge. While ailments such as asthma are well known, others, including Vocal Cord Dysfunction-Exercise Induced Laryngeal Obstruction (VCD-EILO), are less recognized and harder to diagnose.

Ithaca College professors Michael Matheny, MS, ATC, of the Department of Exercise and Sports Sciences, and Mary Pitti, MS, CCC-SLP, of the Department of Speech Language and Audiology, are working together to address the lack of knowledge surrounding VCD-EILO, as well as promote partnerships between athletic trainers and speech language pathologists.

The collaboration between the two professors began after the Ithaca College team physician suggested an athlete who was having trouble breathing see Pitti if his condition didn’t improve. Although Matheny was aware of VCD-EILO, he was surprised by the referral and the role the speech language pathologist played in treating the disorder.

Pitti and Matheny met to discuss VCD-EILO and treatment options. Through their discussion, they both felt there was a lack of knowledge surrounding the condition and the importance of athletic trainers and speech language pathologists in its diagnosis and treatment.

“This was the first time in my practice that I was referred an athlete from an athletic trainer,” said Pitti, adding that patients are typically referred to her by a pulmonologist, otolaryngologist or pediatrician. “[Athletic trainers and coaches] are other ways we want to get the word out.”

VCD-EILO is a type of vocal cord dysfunction that is triggered by exercise, Pitti said, adding that findings shows 2 to 3 percent of athletes and 5 percent of outdoor athletes suffer from the condition. Rather than opening, the vocal cord and laryngeal tissue close, affecting the athlete’s breathing pattern, stress level and performance.

Pitti said often times VCD-EILO is misdiagnosed because the first apparent symptom is shortness of breath, which many relate to asthma.

“People are very aware of asthma, so they encounter an athlete who is having breathing problems … and the first thing they think of is asthma,” Matheny said. “There are some differences [between VCO-EILO and asthma], but if they’re not aware of those differences, it can very easily look like asthma.”

Through their research, the duo learned it is common for athletes with VCD-EILO to be prescribed an inhaler for asthma, which may help somewhat, but the athlete will continue to struggle with their breathing. The athlete may then decide to “just deal with it” or will be referred to a specialist, Matheny said.

“In many cases, it takes a couple of years before the person with vocal cord dysfunction gets an accurate diagnosis,” he said.

Because athletic trainers are onsite and see what happens to an athlete when they exercise, they can recognize the VCD-EILO and help the athlete get the proper diagnosis without taking two to three years.

Pitti said the best way to get a definitive answer of VCD-EILO would be through an endoscopic study. This requires a piece of equipment placed in the person’s throat to monitor the vocal cords when they are in the height of exercise.

“Through this observation, they could see the vocal cords and the soft tissue surrounding it doing the opposite of what it is intended to do,” she said. “Sometimes it’s hard to get a definitive observation. It’s very difficult to simulate intense exercise with all of this equipment on, so sometimes the physician will make a clinical diagnosis, and that’s if they meet the perimeters of the differential diagnosis between asthma and the vocal cord dysfunction in its presentation.”

While asthma and VCD-EILO both consist of shortness of breath, the sound of the breath is different with VCD-EILO being a high-pitched, grating sound and asthma being a wheeze. There are other differences as well. Those with VCD-EILO struggle with inhalation, while those with asthma struggle with exhalation. Athletes with VCD-EILO will experience tightness in their throat, not tightness in their chest like those with asthma. Also, VCD-EILO has a rapid onset and rapid recovery while the onset and recovery of asthma is gradual.

Matheny said when an athletic trainer encounters an athlete with shortness of breath, they should consider VCD-EILO along with other possibilities. He added that if an athlete who is diagnosed with asthma continues to struggle or isn’t responding to their prescribed therapy, athletic trainers should bring the possibility of VCD-EILO to the athlete’s or their parents’ attention.

“Try to prevent the athlete from getting stuck in that lengthy period of time before they get an accurate diagnosis,” he said. “Key points to the athletic trainer are early recognition or early suspicion and then appropriate referral to someone who is knowledgeable of this condition.”

After an athlete is diagnosed with VCD-EILO, they should then see a speech language pathologist for treatment.

“[Treatment includes] teaching proper diaphragmatic breathing,” Pitti said. “A lot of times, when athletes are in intense exercises they might be holding their breath or breathing kind of thoracically with their chest as opposed to their diaphragm.

“We find that a lot of athletes are mouth-breathers, so teaching them how to do nasal breathing or at least shared breathing along with diaphragmatic breathing in a more relaxed state can actually prevent an episode. It [also] can shorten the intensity of an episode and can even eliminate or control the condition to a much more manageable state.”

Speech language pathologists also work with the athletes on behavioral modification, so they become more in tune with their bodies and can recognize the first signs of an attack.

“They would then start a series of breathing-recovery exercises and try to sort of get ahead of the condition before it turns into a full episode,” Pitti said.

To help get the word out, the duo recently conducted a poster presented on the topic to the New York State Speech Language Pathologist Association. While there are many types of vocal cord disorders caused by various triggers, the exercise-induced variety isn’t always at top of mind, Pitti said.

“That was also something we were bringing to the forefront of the speech language community, too, is that they can get the word out in their communities by talking to athletic trainers, coaches or sports medicine doctors,” she said.

Through their endeavors, Matheny said they have seen an increase in awareness among athletic trainers and speech language pathologists on not just the condition, but the potential partnership among the two professions.

“The people who talked to us [at the poster presentation] were really interested and fascinated by this condition,” Matheny said. “They knew it existed, but weren’t really up on the athletic part, so they thought it was really fascinating that their profession was interacting with the athletic training profession.”

To help you educate your community about VCD-EILO and how it's different from asthma, NATA has created a VCD-EILO vs. Asthma Handout (pdf). 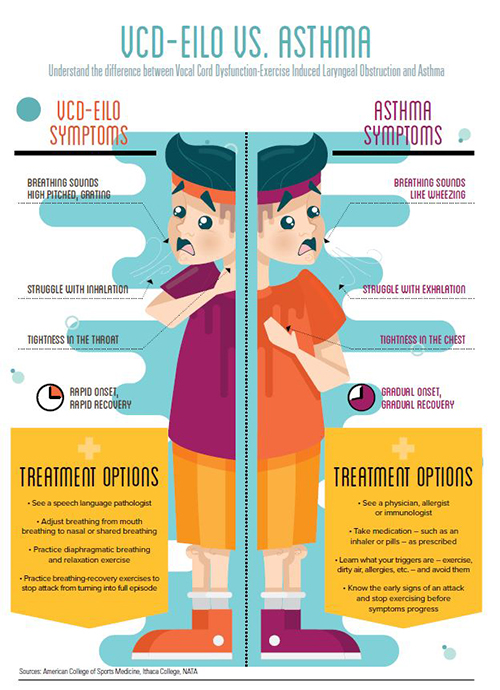 Don’t forget to check out our other infographic handouts that have been made available for NATA members to download, reprint and distribute to their local communities.

From the SLC: ATs Care's Beginnings