How Do We Choose Our Convention City?

NATA members often ask us how we select our convention city each year. It’s a complicated process that takes into account many factors. NATA’s Director of Meeting Management Lori Marker took the time at our recent Joint Committee Meeting to explain the process to attendees. Her presentation received such great feedback that we thought we would summarize it here on the blog for those unable to attend. You have questions, we have answers!

Right now the NATA convention location is booked six years in advance, but that lead time is likely to increase due to our association’s growth and the increasing competition for large convention facilities. Right now we are booked through 2019, and our Meetings Department will bid our 2020 and possibly 2021 conventions this year.

Prior to January 2014, the bid was restricted to certain cities because the NATA convention operated on a strict rotation to certain geographic regions (east, central, west). We eliminated the convention rotation pattern in early 2014, and now the bid process is a nationwide search for the best host city.

First things first: Our convention is a large event by convention industry standards. It is ranked as one of the Top 50 Largest Medical Meetings in the U.S. by the Healthcare Convention & Exhibitors Association. The growth of the convention is very encouraging, but it does eliminate many cities from consideration because they do not meet our requirements.

NATA starts with a list of 20 cities that can meet our exhibit and meeting space requirements: 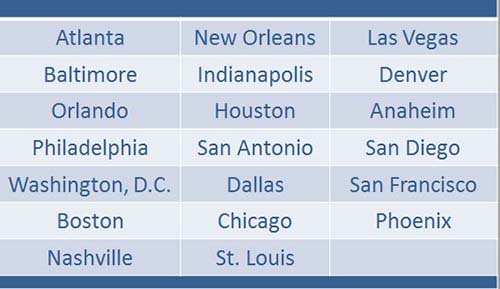 That initial list is further narrowed once we consider the following four criteria:

Convention center space and cost
As mentioned above, the convention center must be large enough to host our event. We also consider the expenses, which include facility rental fees and labor rates. Significant facility restrictions also impacts costs.

Date availability
Our convention is restricted to the last two weeks in June because that is when most ATs are able to travel and attend our event, so we do not have date flexibility. The cities must be available to host within our window.

Hotel package
A hotel package consists of the number of desirable convention hotels and rooms available, plus the hotel rates offered. The number of hotels and rooms within a 10-block radius of the center is a critical factor. When hotel room supply exceeds demand (NATA, other groups and events, tourism or a combination thereof) there is less compression in the city, and we are able to negotiate affordable tiered rates (multiple rate levels) with the hotels. When demand meets and/or exceeds supply, compression will occur and higher hotel rates will prevail across the board. Cities where standard hotel rates are above $200 are not considered.

Entertainment package
Networking is a big part of the convention, so it’s paramount that adequate restaurant and entertainment (clubs, bars, museums, etc.) options are located in close proximity to the convention center and hotels. While this isn’t a deal-breaker, it is a detractor.

After considering those four criteria, we are left with the following 11 cities as our best options to be our host city:

* Cities in black represent those we have already booked for future conventions.

Those remaining cities are in the running each year, and our Meetings Department works very hard to do its due diligence and pick the best option for our members. Our main priority is to put on an excellent convention that is accessible to as many members as possible.

The great news is that many cities are reinvesting in their convention centers, and major hotel chains are building new convention hotels in these cities. We’re hopeful that we’ll have more options in the future.

We hope this provides a little more insight into site selection for the convention. Most of all, we hope to see you at NATA 2015! Visit the convention website now to see the Preliminary Program and start planning your itinerary. It’s going to be another superb event.

April NATA News: From the Editor

Are You Being Counted?