When NATA meets for the 65th time this June, the athletic trainers who attend will find a well-planned symposium with a wide variety of topics. Few of the 10,000 or so attendees will stop to think about the difficulty of successfully pulling off such a large meeting. This is a credit to both the innumerable volunteers and NATA staff, for there was a time when a meeting 100 times smaller could not be accomplished by those attempting to do so.

The initial attempt failed, at least for athletic trainers, before it really got started. Led by Keene Fitzpatrick of Princeton, the Association of College Track and Field Coaches and Trainers formed in Philadelphia on June 1, 1918. Since most early athletic trainers were track coaches (hence the name athletic trainer), having one organization made some sense. The timing was not so good, as it was in the middle of World War I and many athletic trainers had taken on extra duties related to the war. It was decided to postpone officially forming the organization until after the war. When it finally formed, the “trainer” part was dropped, becoming the Association of College Track Coaches of America.

Athletic trainers would not attempt to organize again until 1938. At the 1938 Drake Relays, the original National Athletic Trainers’ Association formed. (Sometimes they would use the apostrophe in the name, and sometimes not.) It was still the Great Depression, but they had an ambitious plan that included holding a national meeting. Several attempts were made, usually associated with a national coaches meeting, but none ever occurred. The best they could do was to meet at some track meets where many of the athletic trainers were working. The original NATA failed in 1944, mostly due to the effects of World War II.

After the war, many regional athletic trainers associations began to form based on the major collegiate conferences of the time. By June 1950, seven of the original nine NATA districts had organized in some manner (the Eastern Conference Athletic Trainers’ Association would be split into two districts).

The February 1950 First Aider announced that the Cramer Chemical Company would be hosting “A Free Training Clinic – National In Scope” to take place June 24-25, 1950. It would be held at the Hotel Muehlebach in Kansas City, Mo. Chuck Cramer contacted the regional associations to encourage attendance, recruit speakers and promote the formation of a national organization.

A total of 258 athletic trainers, coaches, administrators and physicians registered for clinic, which had to be moved to the Kansas City Municipal Auditorium due to the high attendance. Most of the clinical program was made up of presentations prepared by representatives of the various regional athletic training associations.

After the clinical sessions on June 24, 101 athletic trainers met at the Hotel Muehlebach.  All but two states (Utah and Maine) had representatives at the Kansas City Meeting. At this meeting, the current National Athletic Trainers’ Association was formed.

The new organization had nine board members, one from each independent district. The Mid-West Athletic Trainers’ Association, now District Five, had formed the day before, leaving only District Seven (Idaho, Montana, Utah, Wyoming and part of Colorado) unorganized. It should be noted that district boundaries have changed greatly since 1950. The districts set their own membership standards. There were no officers, as the ATs were somewhat distrustful of centralized authority, and NATA would not elect a president until 1970. Dues were $2, which later would pay for dues and registration to the national meeting. Chuck Cramer was appointed as the Executive Secretary, in charge of the daily operation of the NATA. 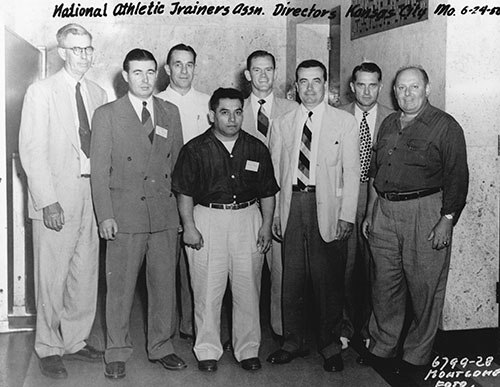 For the first five years of the organization, the Cramer Chemical Company provided the financial backing to allow the new association a chance to gain traction. In 1955, NATA members decided it would be best not to be so closely tied to a single company. Johnny Cramer, who had taken over for Chuck Cramer the year before, was replaced as Executive Secretary by William “Pinky” Newell of Purdue. The Cramer Chemical Company wrote NATA a check for the dues they had collected through the first five years (without deducting expenses) and the NATA was well on its way.

Blog author Matt Webber is an athletic training aficionado who manages a website dedicated to athletic training history (athletictraininghistory.com). He recently finished his book about the early history of the profession, which is available for purchase online.

August/September NATA News: From the Editor